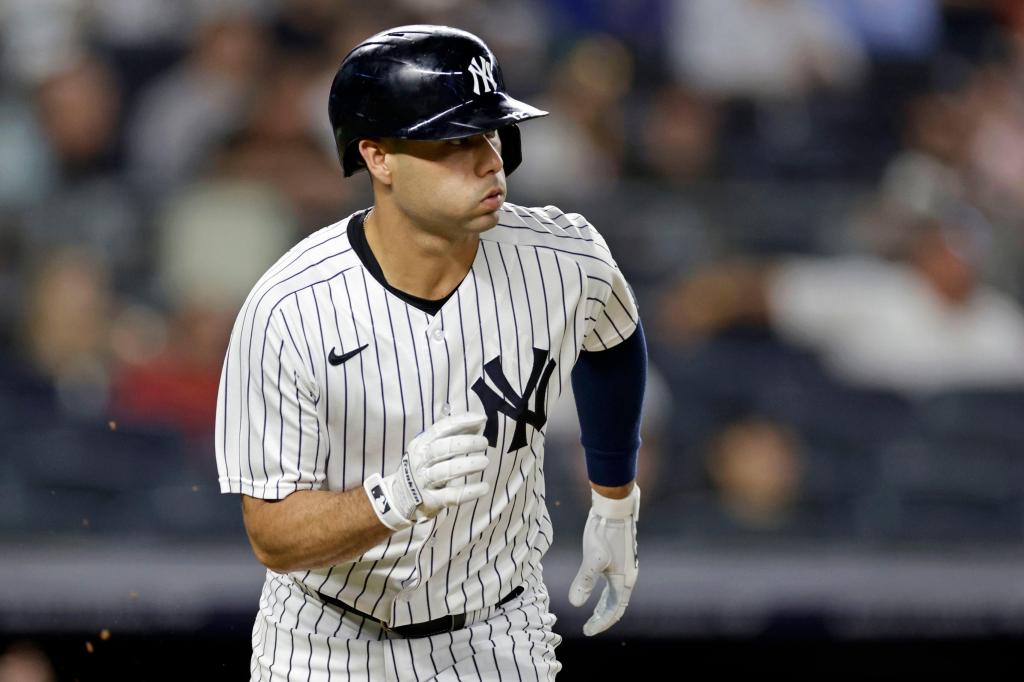 TORONTO — Isiah Kiner-Falefa was a victim of the Yankees’ offense. He tweaked his left hamstring running first to home on Saturday and was not available on Sunday. That became obvious when the Bombers had Giancarlo Stanton on base in the ninth and could not pinch run for him in their 10-9 loss to the Blue Jays.

Kiner-Falefa is optimistic he will be able to play on Monday when the Yankees kick off a series with the Rays at Tropicana Field.

“Just some hamstring tightness, it just tightened up on me a little bit, it was a little crampy, so better to take care of it now after getting the two wins of the series and figured going into Tampa playing on turf, it was best to rest today,” Kiner-Falefa said. “So I had a full rest day today.”

That included when Boone used everyone else on the bench and had to move Gleyber Torres back to shortstop and then could not pinch run for Stanton in the ninth.

Kiner-Falefa said he had this feeling once before.

“In 2020 I felt something similar when I was with Texas after the first game of the season, sat one game completely off and then played every game the rest of the season,” Kiner-Falefa said of the COVID-shortened 2020 season, when he played 58 of 60 games. “So I told them that that had happened before, the training staff, and that’s kind of how we went about it. Take a day and make sure I do everything possible to get it going and hopefully from tomorrow on I am good to go.”

Kiner-Falefa has hit .273/.320/.325 with 11 doubles and 18 RBI. He’s been a solid shortstop who makes some tremendously big plays and has had some struggles with the routine. Torres has thrived offensively and defensively since they moved him out of the shortstop role last September. Not wanting to mess with that, Yankees manager Aaron Boone used Marwin Gonzalez at short Sunday. He homered, giving the Yankees their first homer from the shortstop position this season.

“Andy Friedman, an artist out of Brooklyn, made these,” Boone said.

He also had company on the trip.

“My wife and daughter were here all weekend, as you know, they’re flying back today back to New York. So it’s really cool having them here this weekend. Good to get to spend some time with them,” Boone said. “And then just being in there with these guys right now. A lot of fathers obviously.”

YES cameras caught Josh Donaldson, who spent the weekend hearing pretty energetic boos from the fans he used to play in front of, and Gerrit Cole doing some bonding. It was an odd couple considering last year, Donaldson called out Cole as one of the pitchers who came back to earth after MLB began checking for illegal sticky stuff.

“Like any team, any family, you always have things that come up, issues that come up and these guys have done a really good job of running through those,” Boone said. “And I think through it all, whether it’s a great time to go through that, it brings closeness, whether it’s challenging times, if you can get through those, usually it makes you a little bit closer, and there’s no question this group is really, really tight.”

Boone had Cole and Donaldson sit down and hash out their issues in spring training when the Yankees brought in the third baseman.

Domingo German will begin his rehab assignment this week with the low Class-A Tampa Tarpons, Boone said. The right-hander has been on the injured list with right shoulder impingement syndrome since March. … Aroldis Chapman is going to face live hitters for the first time this week. Boone misspoke about Chapman’s last outing, which was just a bullpen—meaning no hitters in the box swinging. He threw 28 pitches. Chapman will face hitters on Tuesday at the player development complex in Tampa.