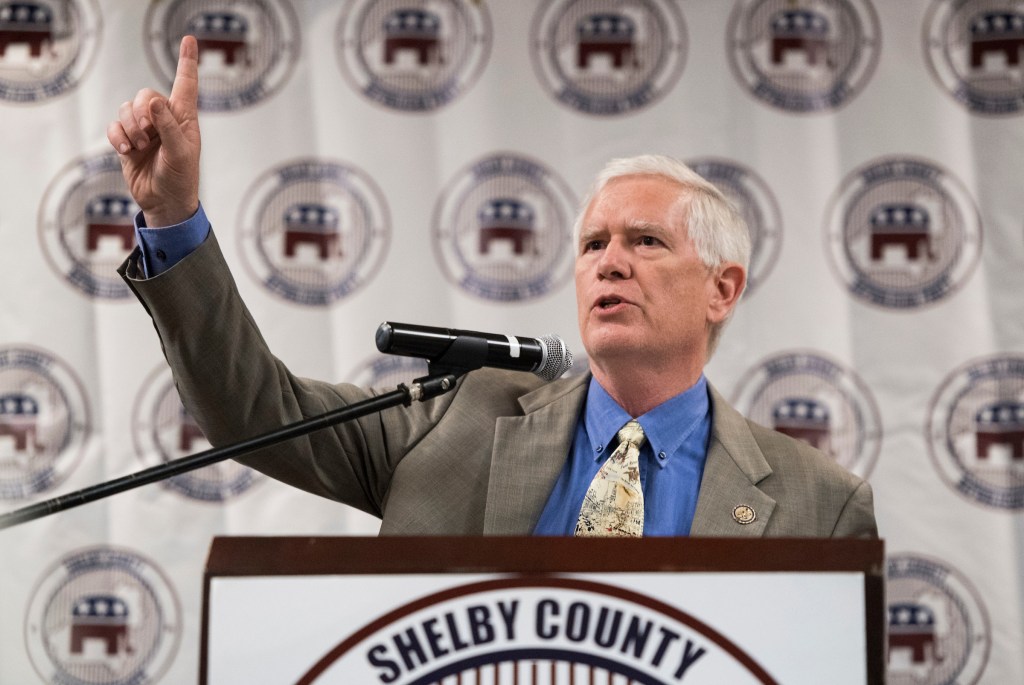 Welcome to At the Races! Each week we’ll bring you news and analysis from the CQ Roll Call campaign team. Know someone who’d like to get this newsletter? They can subscribe here.

President Joe Biden wants Congress to suspend federal gas taxes for 90 days, with the White House saying that the goal is to bring down prices at the pump for the “summer driving season.”

“The next three months, the next 90 days is when American families — people are going to be driving the most,” Press Secretary Karine Jean-Pierre said Wednesday. But that would, of course, mean the gas tax would be added back to the price at the pump about a month before the midterm elections.

Even as the proposal has received a lukewarm response (at best) even from Democrats on Capitol Hill, several of the most vulnerable incumbents have been reminding folks that their gas tax suspension proposal, filed way back in February before Russia invaded Ukraine, would run through the end of 2022.

“Granite Staters need relief at the pump now. While I am encouraged that the President now supports a gas tax holiday, I continue to believe that we should seek to suspend the gas tax for at least the rest of the year, not just 90 days,” Sen. Maggie Hassan, D-N.H., said.

Arizona Sen. Mark Kelly is the lead sponsor of that bill, joined by Hassan and vulnerable Democratic senators including Catherine Cortez Masto of Nevada and Raphael Warnock of Georgia.

T.W. Arrighi, spokesman for the Senate GOP’s campaign arm, responded to Biden’s plan with a statement comparing the tax holiday to “blowing a hole in the side of a ship and proposing to put a Band-Aid on it. It’s insanity at a near-comedic level.”

What we learned: More candidates endorsed by former President Donald Trump lost in Georgia runoffs this week, but the ex-president claimed a win with Katie Britt’s victory in Alabama’s Senate GOP runoff. Rep. Mo Brooks, however, was on the losing end of that race, meaning his 12-year career on Capitol Hill will end when the current Congress adjourns in January.

Dollar deluge: CQ Roll Call’s Caitlin Reilly digs into money from cryptocurrency-fueled PACs flooding primary races this season and what it might mean for future congressional action on regulation.

Alaska special: The Last Frontier State is living up to its nickname by venturing into unexplored territory in the way it will pick someone to serve the remainder of the late Rep. Don Young’s term. Four candidates advanced to the special general election in August. But, already, one — independent Al Gross — has withdrawn and, as of now, isn’t likely to be replaced on the ranked-choice ballots.

Talking big: National Republican Senatorial Committee Chairman Rick Scott took an optimistic tone on the GOP’s chances to win control of the Senate in this year’s midterms. “The Biden approval numbers are pretty bad. So I think we have every opportunity to believe we can get a majority,” he told reporters this week at a roundtable organized by the Christian Science Monitor. “I think the race will probably come down to making sure we can keep our seats in Wisconsin, Pennsylvania, North Carolina. Then pick up Georgia and Nevada, New Hampshire and Arizona, but we have opportunities in other states.” He cited Colorado; Washington, where incumbent Sen. Patty Murray has been running ads; and even deep-blue Connecticut. “If our candidates do a good job, we raise the money, I think we have a big opportunity,” the Florida Republican added.

Cuellar count: It took four weeks, but Texas Democratic Rep. Henry Cuellar was declared the winner of his primary runoff against progressive immigration attorney Jessica Cisneros after a recount found he won by 289 votes.

Battle on the home front: Rep. Elise Stefanik’s quarrel with New York GOP Chair Nick Langworthy has escalated since Langworthy decided to run for the 23rd District and is in a primary against Stefanik-endorsed Carl Paladino, according to Politico.

Breaking point?: Missouri GOP Senate candidate Eric Greitens received massive backlash after he released a video ad in which he declared he was “going RINO hunting,” as he racked a shotgun and joined a SWAT team breaking into a home. The video was removed by Facebook and flagged on Twitter for violating policies against promoting violence and abuse, but Greitens — who has been accused of sexual assault and domestic abuse — didn’t back down. He responded to an editorial in The Washington Post that called for GOP officials to condemn the video with a tweet thanking the paper for hosting a link to the video on its website.

Speaking of Missouri: John Wood, a senior counsel for the House committee investigating the Jan. 6, 2021, insurrection, is departing to consider running for Senate in Missouri, The Washington Post and other outlets reported. Wood, a former U.S. attorney in Missouri under George W. Bush, would run as an independent and could be an alternative to Greitens.

Texas style: The Texas GOP adopted a 40-page platform that falsely declared that Biden lost the 2020 election, that gun control violates constitutional rights and that Texas should consider seceding. The resolution also “rebuked” GOP senators working to draft bipartisan gun legislation, including Texas Sen. John Cornyn, who was booed by delegates. And some members of the crowd physically confronted GOP Rep. Dan Crenshaw, who won his March primary with nearly 75 percent of the vote after he was attacked for his willingness to consider limited gun control measures and, falsely, for supporting a federal “vaccine database.” Cornyn won his 2020 election with 54 percent of the vote.

Digital ads: The anti-abortion rights group Susan B. Anthony Pro-Life America said Thursday it was launching a $2 million digital ad campaign in eight battleground states ahead of a pending Supreme Court decision that could undo the 1973 landmark Roe v. Wade case. The ads target voters in Arizona, Georgia, Florida, Michigan, North Carolina, Nevada, Pennsylvania and  Wisconsin and will run for the two weeks, the group said.

Florida man: Democrat Andrew Gillum, who narrowly lost Florida’s governor’s race to Republican Ron DeSantis in 2018, dismissed as “political” a 21-count federal indictment alleging wire fraud, conspiracy and lying to investigators in connection to a probe that began when he was Tallahassee mayor, with undercover FBI agents posing as developers.

Survey says: The good news is polling is no worse than it was a generation ago, Monmouth University polling director Patrick Murray writes in a blog post. The bad news is that election “horse race” questions are not what polls were designed to answer.

Chatting with ‘the 10’: CNN interviews some of the 10 Republicans who voted to impeach Trump, who are evaluating their own primary chances after South Carolina Rep. Tom Rice’s loss against a challenger who attacked him for his impeachment vote. One bit of trivia: The group, which CNN termed “The impeachment 10,” keeps in touch via a group chat.

Independent vote: While some analysts think Wyoming GOP Rep. Liz Cheney’s chances of surviving a Republican primary will depend on Democrats who switch parties to vote for her, University of Wyoming political science professor James D. King breaks down the numbers and concludes that Democrats will play a relatively little role in determining the winner, while independents’ role will be “substantial.”

Failures of campaign finance law: Ellen Weintraub, a longtime Democratic commissioner on the Federal Election Commission, explores why, in her view, campaign finance laws have failed in the post-Watergate era in a Washington Post op-ed. Former Republican FEC Commissioner Trevor Potter writes in an opinion piece in The Hill that the “agency no longer functions as intended” and argues “the judicial system must step up and enforce the law — but Congress must pass legislation that will compel the FEC to do its job.”

That’s how far off Trump’s estimate of the number of dead people whose votes were included in Georgia’s 2020 election results was, according to Georgia Secretary of State Brad Raffensperger. “In their lawsuits they allege 10,315 dead people,” Raffensperger told the House select committee on Tuesday. “We found two dead people when I wrote my letter to Congress that’s dated Jan. 6. And subsequent to that we found two more. That’s one, two, three, four people. Not 4,000, but just a total four. Not 10,000. Not 5,000.”

New Hampshire usually makes a big thing out of being first in the nation in stuff. But it was the last state to finish redistricting (not including court battles). Now that the state has finally figured out where to draw a single boundary line between the 1st and 2nd districts, Nathan L. Gonzales looks at the competitive races ahead.

Jennifer-Ruth Green, who recently won the Republican nomination to challenge Democratic Rep. Frank Mrvan in an Indiana district the National Republican Congressional Committee is targeting, said her father encouraged her to learn languages from a young age and that she speaks several. She started taking Japanese classes every Saturday while she was in seventh grade and eventually minored in Japanese while she attended the Air Force Academy. She studied French in high school. She also picked up Tagalog from her mother, who is from the Philippines, and learned some Spanish while growing up in California.

Wilkins, a former communications staffer for the Republican National Committee and in the Senate for Kevin Cramer of North Dakota and Ron Johnson of Wisconsin, does public relations at the firm Rational 360, where he is a senior director. The Oregon native worked on several local campaigns in the Pacific Northwest before moving to Washington, D.C.

Starting out: “I got into politics when I was 17 volunteering for a local nonpartisan county commission race in a county just outside my hometown of Portland, Ore.,” he said.

Most unforgettable campaign moment: “Having my suit get stolen just a couple hours before I had to staff a presidential fundraiser in Fargo, N.D.,” he recalled. “Fortunately, there was a mall right across the street.”

Biggest campaign regret: “I’ve only worked in politics for a handful of years, but in that time I’ve had some great opportunities become available to me. While I have no complaints for where I am and am super grateful for the doors that opened for me, I think there’s value in staying in a current job and really growing in those roles, which I definitely missed out on,” he said. “D.C. could use more people who know how to be content where they are.”

Unconventional wisdom: “The relationship between public relations folks and the media is broken,” Wilkins said. “Reporters spend all day chasing folks for comment while ignoring the PR people reaching out to them, while those same PR people miss out on reporters they would have no idea are interested in their topic because they are chasing down uninterested reporters to pitch them. That makes already-existing relationships the key to success, but that is an imperfect way for an industry to continue. Whoever finds a way to streamline and automate the pitch process is going to change the public relations world forever.”

Do you know someone who works in campaigns whom we should feature for Shop Talk? Email us at [email protected].

Trump plans to hold a rally in Mendon, Ill., on Saturday with Rep. Mary Miller, who faces fellow GOP Rep. Rodney Davis on Tuesday in a primary for the 15th District nomination. “I’m proud of my conservative record of working with Trump when he was in office, and I won’t shy away from it,” Davis said after Trump announced the rally.

Subscribe now using this link so you don’t miss out on the best news and analysis from our team.

The post At the Races: Not too pumped appeared first on Roll Call.