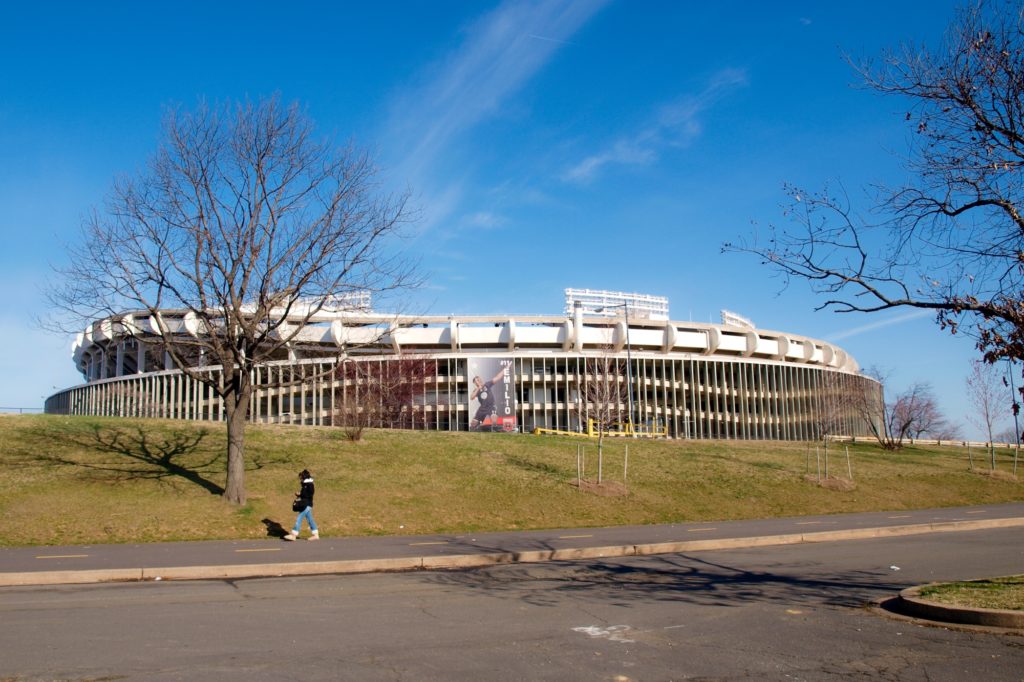 D.C. Council Chairman Phil Mendelson says he’s ready to support Mayor Muriel Bowser’s request that Congress sell or transfer the RFK Stadium campus to the city, but only on the condition that no future football stadium be built there.

Mendelson spelled out his stance in a letter to Bowser on Wednesday. The Washington Post was first to report on the letter, which DCist/WAMU obtained from a council source.

The letter comes amidst longstanding plans from Bowser’s administration to gain ownership of the 190-acre site, which is controlled by the National Park Service and leased to the city for limited uses — sports and entertainment. Bowser has said she wants the large plot of land under city control so it can be used for housing, parks and recreation, and possibly a new stadium for the Washington Commanders. D.C. Del. Eleanor Holmes Norton has said she will introduce legislation to transfer the land, but only if Bowser and Mendelson both support it.

Until now, Mendelson had remained cagey about where he stands on the land’s transfer, largely over concerns that it would ultimately be used for a new stadium for the Washington Commanders. Mendelson was briefed this month by senior D.C. officials on plans to incorporate affordable housing plans in any future uses of the RFK site, which he said in the letter he supports.

But he also made clear that he’s against any stadium there, following the lead of seven councilmembers who said earlier this month that they oppose any new stadium at the site.

“We agree that housing should be the priority, and at various levels of affordability,” Mendelson wrote Bowser. “However, as you know, a majority of [councilmembers] do not support using the site for a sports stadium. Therefore, I am unequivocal that there be an additional use restriction added to… the draft congressional language: that the land not be used for a professional sports stadium. I believe the change not only reflects where the Council is on the matter, but also makes it less objectionable in Congress as there continues to be much controversy over allegations surrounding conduct of some in the Commanders’ senior leadership.”

Those include allegations of sexual harassment of team employees, including by owner Dan Snyder, as well as claims from a congressional committee currently investigating the team that Snyder sought to discredit people who publicly raised concerns about the team’s workplace culture.

The ongoing investigations into Snyder and the team have become notorious enough that earlier this month Virginia lawmakers tabled a bill that would have dedicated hundreds of millions in taxpayer funds to help build a new 55,000-seat stadium and “mini-city” somewhere in Northern Virginia. Similarly, earlier this year Maryland Gov. Larry Hogan said the state would “not get into a bidding war” with D.C. and Virginia over where a new stadium could be built. The team currently plays in Prince George’s County, where its lease runs through 2027.

In a text message, John Falchicchio, the deputy mayor for planning and economic development, did not directly address Mendelson’s letter, but instead said that getting the land under city control remained the priority.

“The future uses at the RFK site are a local decision, and the District should not advocate for federal lawmakers to weigh in on local decisions that the mayor, the council and our residents will make together. Our focus is on getting the land as quickly and efficiently as possible,” he wrote.

The RFK stadium campus remains largely empty to this day, though there are delayed plans to demolish the stadium. The city has built multi-use playing fields on one portion of what used to be the stadium’s ample surface parking, and Bowser’s budget for the coming year includes funding for a $60 million indoor athletics facility.

For her part, Bowser has consistently pushed to bring the football team back into the city, though more recently she has clarified that the only public money she would be willing to spend would be to prepare the land for the stadium to be built. Speaking to a group of reporters after a post-campaign press conference on Wednesday, Bowser delved more deeply into why she wants the Commanders to return to RFK, where they played until 1997 — and enjoyed some of their most successful years.

“I go around town and people ask me about that team. It’s the difference between the football team and the baseball team and the soccer team, culturally. I didn’t appreciate that until somebody called it out to me,” she said. “A lot of you view it as [Snyder’s] team, I view it as our team.”

Bowser also conceded that she didn’t know exactly how it would happen, but that the Commanders would eventually return to D.C. And she said it would happen without Snyder at the helm. “He will be gone,” she said. “The universe is dealing with him.”