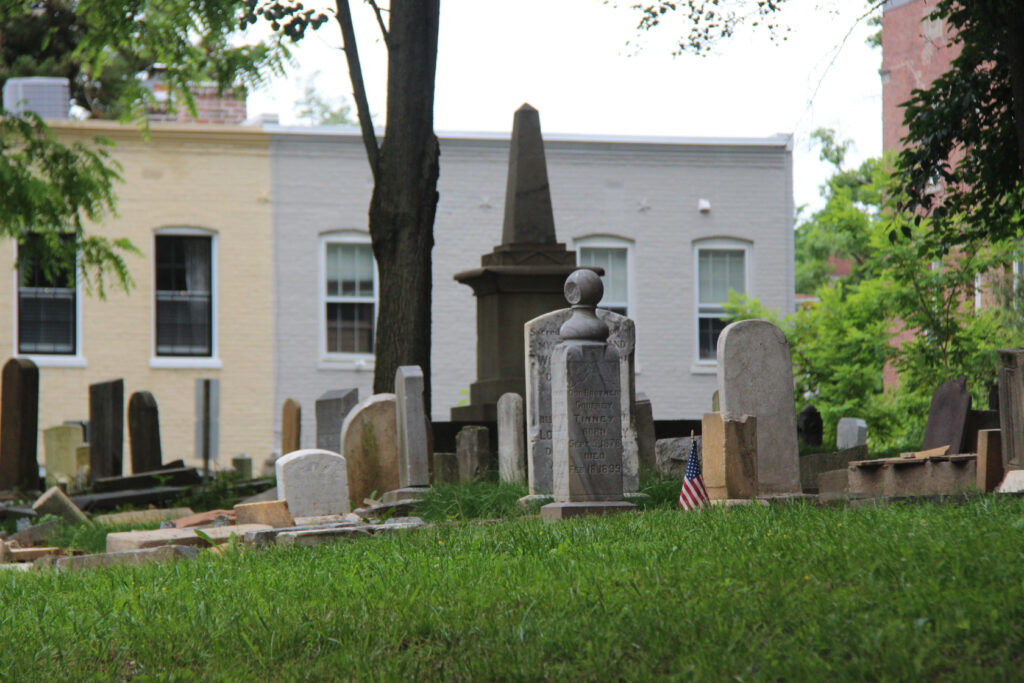 On a balmy day last September, Lisa Fager was on her daily walk through two of Washington D.C.’s oldest African American cemeteries when she saw a construction crew perilously close to the historic grounds. As the the executive director of the Mount Zion-Female Union Band Society, which is working to protect the cemeteries, Fager was shocked that she hadn’t been notified.

Horrified that the workers’ shovels might collide with artifacts or even human remains, she struggled to communicate with the crew in broken Spanish that they needed to stop immediately.

“If I hadn’t walked up on this, business as usual,” Fager told DCist/WAMU. “And the problem with that is Georgetown, Rock Creek Park, this cemetery are all historic properties. That’s not something that should happen.”

The construction was part of a years-long DDOT project to rehabilitate nearly 4 miles of paved park trails and build a brand-new pedestrian bridge next to the National Zoo. The workers, understandably confused by the sudden interruption, called their bosses for clarification. In the meantime, Fager fired off an email to a handful of local and federal leaders.

The cemeteries, dilapidated after years of neglect, are called the Mount Zion and Female Union Band Society Cemeteries, and date back to the early 19th Century. Often referred to as one cemetery, they rest next to each other on three acres of land bordering Rock Creek Park. The first is associated with a church that both free and enslaved Black congregants attended, and the second is named for a mutual aid society of freed Black women who economically supported one another in life, and then in death by jointly purchasing the burial plot. The land is also home to a cemetery vault that many historians believe was used as a hiding place on the Underground Railroad.

The cemeteries became official historic properties in 1975 but the grounds have suffered deterioration from erosion, vandalism, pollution, development, and a lack of funding to address these problems. Directly adjacent the predominantly white Oak Hill cemeteries manicured grounds and intact headstones makes for a stark contrast.

Fager’s intervention on that fall day resulted in a stop work order that halted construction, blocked the area to pedestrian use, and kicked off a months-long archeological fact-finding mission. Still, Fager says the initial failure to notify her organization is representative of the city’s long history of disregard for Black cemeteries. The fact that pedestrians have continued to trample through the site during the process, she says, is more evidence that this disrespect continues today.

“There’s this whole Preservation Act and it’s supposed to save you,” says Fager, who joined the Georgetown preservation society in 2019. While this is her first foray into historical preservation, she’s worked on a variety of civil rights issues, from criminal justice reform, to public health, to voting rights. She added: “It just doesn’t happen to save Black folks, just like everything else in the system.”

‘A Ball Was Dropped’

Exactly why Fager was never notified about the construction is still somewhat of a mystery.

Rock Creek Park Superintendent Julia Washburn says that before starting construction of the new trail, engineers dug 22 test pits as part of a survey commissioned by DDOT in 2016 to determine whether it would interfere with anything of historic or archeological significance. But because the cemetery is designated on the National Register, Fager’s organization should have been made aware before they broke ground.

“Somehow a ball was dropped and they didn’t know,” Washburn says.

The National Historic Preservation Act, signed into law in 1966 by President Lyndon B. Johnson, created the National Register of Historic Places and laid out guidelines on how federal agencies should evaluate historic properties before beginning projects.

One of the reasons for the miscommunication is that the path doesn’t technically run through the current bounds of the cemetery — but that’s only because in 1931 the federal government seized a slice of the historic grounds to build a horse trail.

Washburn says that staff at the National Park Service, which oversees the grounds where the cemetery is located, were unaware of that history until Fager showed them her organization’s property line on a map a few weeks after the stop work order. Fager says this history means there may be remains further beneath the land. She also worries that because the cemetery sits on a slope, erosion may have caused funerary artifacts to slide beyond even the original boundaries of the burial ground.

“This is history, and the fact that they didn’t take their time, it just really sucks. It feels so disrespectful,” Fager says. “Honestly, there could have been better communication. Why you can’t tell the people what’s going on?”

Failing to care for the city’s Black cemeteries is nothing new in the D.C. area.

Nearby, Adams Morgan’s Walter Pierce Park was once Mt. Pleasant Plains Cemetery, the burial site of more than 8,000 Black residents. It was sold to developers in the 1950s and then turned into a park in the 1980s without reinterring all the bodies. In the 1960s, a historic Black cemetery in Bethesda was paved over and turned into a parking lot.

“It’s just another aspect of Black life. You’re treated the same in death as you are in life — as seemingly nothing,” says Maurice Jackson, an African American studies professor at Georgetown University.

Despite the initial oversight, Fager says that NPS has since shown commitment to honoring the cemetery, offering some insight into what a different path forward could look like. They hired an archeological firm, recommended by Fager, which conducted a survey from March 21 to 23 using ground-penetrating radar, magnetometry, and electromagnetic conductivity to better assess what might be under the soil. NPS has spent $27,000 on the work so far.

The firm’s research concluded the land was just comprised of fill or dirt that had been brought in to construct the horse trail in the 1930s.

Fager wasn’t so sure. The day after she noticed the construction crews, she found remnants of a broken bottle which she believes could be a funerary artifact. While Washburn says the archeologists believe it was associated with the fill, Fager didn’t want to take any chances.

For extra assurance, the firm recommended an archeologist be present on site to monitor all further construction work.

When the initially planned construction restarted on May 21, two different firms with experience surveying historic cemeteries were there to observe.

“If they see anything that could remotely be like an archeological resource from these cemeteries, they will stop work and then we’ll do an excavation,” Washburn says.

The cemetery-adjacent portion along with a section along the Piney Branch Parkway are the final pieces of the larger trail reconstruction, which began in March 2021 and is slated to finish in spring of 2023. Barring any archeological discoveries, the trail along the cemetery should reopen near the end of June. That reconstruction process will allow the trail to last for another 50 years, Washburn said.

While Fager has been pleasantly surprised by the rigor with which NPS has addressed her concerns, she still feels the weight of disregard for Black cemeteries.

Despite “trail closed” signs, barricades, fencing, and even a flier explaining the historical significance of the grounds, Fager said she’s seen joggers and bikers regularly traversing the marked-off area throughout the archaeological assessment.

“The privileged don’t think ‘trail closed’ means them. This is what makes me so upset,” Fager says. “I’ve watched these folks … just desecrate [the grounds].”

Efforts like Fager’s, however, are helping to spur additional efforts to honor the city’s Black cemeteries, carving out new models for historical preservation.

Just this month, the Alliance for New Music-Theatre presented “Voices of Zion,” an original musical featuring characters from the cemetery in an attempt to draw attention to preservation efforts and tell the stories of largely forgotten Black Georgetowners.

And, the D.C. Council recently approved $1.65 million in 2023 budget funding to the joint cemeteries for stormwater management to address “perpetual, systemic neglect.”

NPS is also attempting to reckon with its history — Washburn said her intention is to make Rock Creek Park an anti-racist organization.

NPS worked with Mount Zion-Female Union Band Society to install two exhibits along the trail that explain the history of the cemetery. They’ve also been hosting webinars on the history of race in the park.

Instead of destroying it, Fager says this reckoning and the joint efforts at repair have strengthened the relationship between NPS and the Mount Zion-Female Union Band Society. She added that this was possible because Washburn showed her commitment to listening instead of “BS-ing.”

The post Inside The Latest Fight To Protect D.C.’s Historic Black Cemeteries appeared first on DCist.