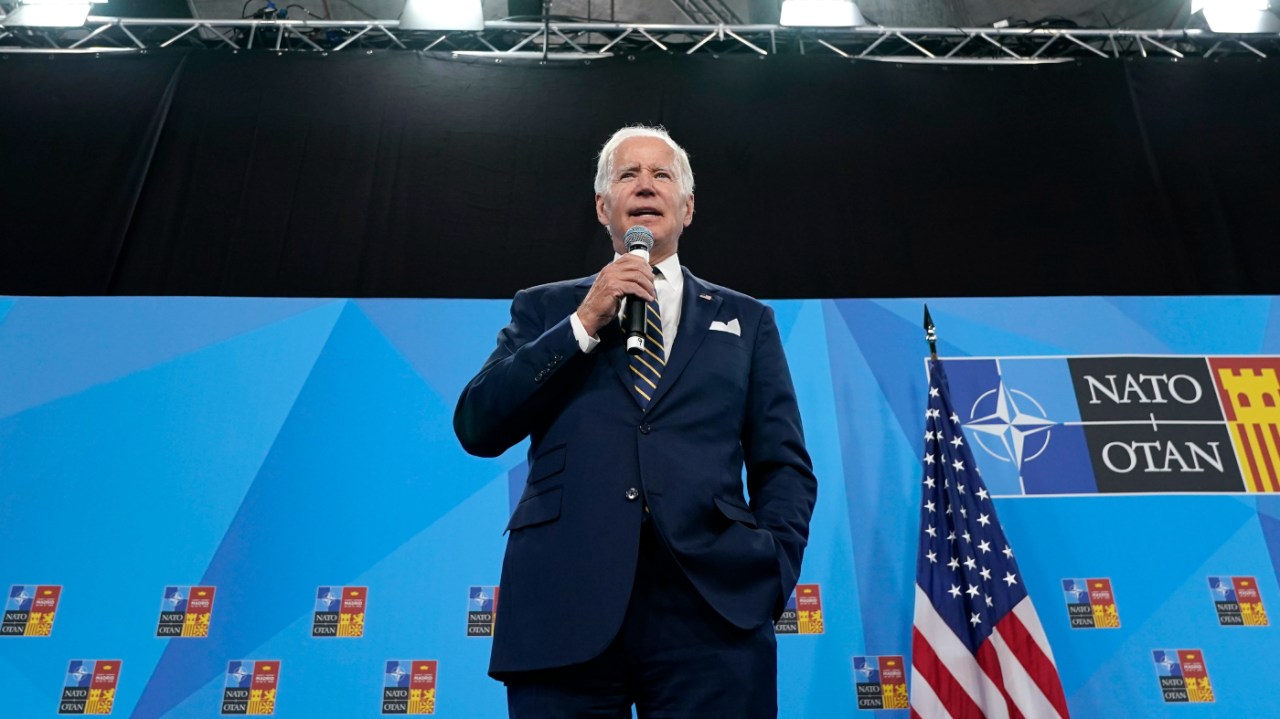 President Biden is injecting new vigor into the fight to protect abortion rights, seemingly nudged into action by criticism from within his own party about a lackluster response to date.

Biden branded the Supreme Court’s decision last week to strike down the landmark 1973 Roe v. Wade ruling as “outrageous” and “destabilizing” during a Thursday news conference in Madrid.

More importantly, he declared his support for a carve-out to the Senate filibuster in order to codify Roe’s now-stricken provisions into federal law.

Biden said that if “the filibuster gets in the way” of such a law then “an exception” would have to be made.

His chances of success in that regard look slim, however.

Every Senate Democrat would need to vote to amend the filibuster rules, given that no Republicans are expected to back such a move. There are no signs as yet that Sens. Joe Manchin (D-W.Va.) and Kyrsten Sinema (D-Ariz.) have altered their previous opposition to filibuster reform.

That said, Biden’s move was welcomed by progressives who have been dismayed by the administration’s response to the Supreme Court’s June 24 decision rescinding a right that had stood for almost half a century.

“Now we’re talking!” Rep. Alexandria Ocasio-Cortez (D-N.Y.) enthused on Twitter about Biden’s pledge. “Time for people to see a real, forceful push for it. Use the bully pulpit. We need more.”

Ocasio-Cortez, along with other progressive figures including Sen. Elizabeth Warren (D-Mass.), has been to the fore in demanding more sweeping action. The New York congresswoman has urged the administration to throw its weight behind an expansion of the Supreme Court, and to lease federal land to abortion providers.

But Biden is opposed to expanding the court, and Vice President Harris on Monday told CNN that the latter idea is “not right now what we are discussing.”

On Wednesday, Warren took to Twitter to outline several steps that she contended could help supporters of abortion rights “to go on offense as well as defense.”

She backed a Michigan effort to force a ballot initiative that would potentially enshrine abortion rights in the state constitution; a campaign to rebuff an anti-abortion effort in Kansas; and the Senate candidacies of two Democrats: Wisconsin Lt. Gov. Mandela Barnes, who hopes to oust Sen. Ron Johnson (R), and Pennsylvania Lt. Gov. John Fetterman, who is running against Republican Mehmet Oz to replace retiring Sen. Pat Toomey (R).

The specificity of Warren’s recommendations offer a counterpoint to Biden’s overall approach which — to the frustration of many in his own party— has leaned on nebulous slogans and at times even avoided using the word “abortion.”

At his Madrid press conference, Biden insisted that the “bottom line” is to “vote, vote, vote.”

And indeed, the battle over abortion is already impacting the midterm campaign.

Planned Parenthood announced Thursday that it is launching a $3 million TV ad buy in Pennsylvania hitting Oz for what the organization termed his “plans to restrict and criminalize” abortion.

Fetterman released a statement promising abortion rights advocates, “Send me to D.C., and I will proudly cast that 51st vote to eliminate the filibuster and codify the right to an abortion into law.”

In the short-term, the battle to protect abortion rights won’t be won on the Senate floor unless Manchin and Sinema yield.

Instead, the new frontlines are forming in state courts, where abortion rights activists are seeking to stymie new curbs including so-called “trigger laws” that had been readied with the purpose of severely restricting or banning terminations if Roe fell.

The abortion rights side won its most significant victory to date in Florida Thursday, where a judge found a new law that would ban all abortions at 15 weeks was likely unconstitutional.

The judge temporarily blocked the law, which provides no exception in cases of rape or incest.

Florida Gov. Ron DeSantis (R), a strong conservative and a possible 2024 presidential contender, immediately pledged to appeal the judge’s decision. The case is expected to end up in Florida’s Supreme Court.

Also on Thursday, a judge in Kentucky blocked two trigger laws in the state that were challenged by several plaintiffs, including Planned Parenthood, backed by the American Civil Liberties Union.

The lawsuit argues that the proposed bans “violate the rights to privacy, bodily autonomy, and self-determination outlined…in the Kentucky Constitution.”

Temporary judicial blocks to new abortion restrictions have also been erected in Louisiana, Texas and Utah. Legal fights are underway or imminent in several other states.

There won’t be any speedy settlement of the issue. Sara Rosenbaum, a professor of Health Law and Policy at the George Washington University’s Milken Institute School of Public Health, noted that the outcome to the various legal fights will likely “unfold at a relatively slow rate” even if “some courts may expedite a ruling.”

It’s not only the pro-abortion rights side that is active, of course.

Some anti-abortion campaigners, energized by their landmark Supreme Court victory after decades of struggle, have set their sights on a national abortion ban. Former Vice President Mike Pence was among the first Republicans to call for every state to ban abortion after the high court’s decision came down.

Meanwhile, an opinion authored by Justice Clarence Thomas in the abortion rights case held out the prospect of other key Supreme Court decisions being overturned since they, like Roe, rest on a supposed constitutional right to privacy.

Biden has focused a lot on that reasoning, warning of the cascading impact of the abortion ruling.

On Thursday, the president threw himself into the fight with more determination than before.


Hong Kong 25 years later: Why it matters for the US

Others in his party know the battle will not be easily won.

But for now, they’re just relieved he’s willing to wage it.

The Memo is a reported column by Niall Stanage.