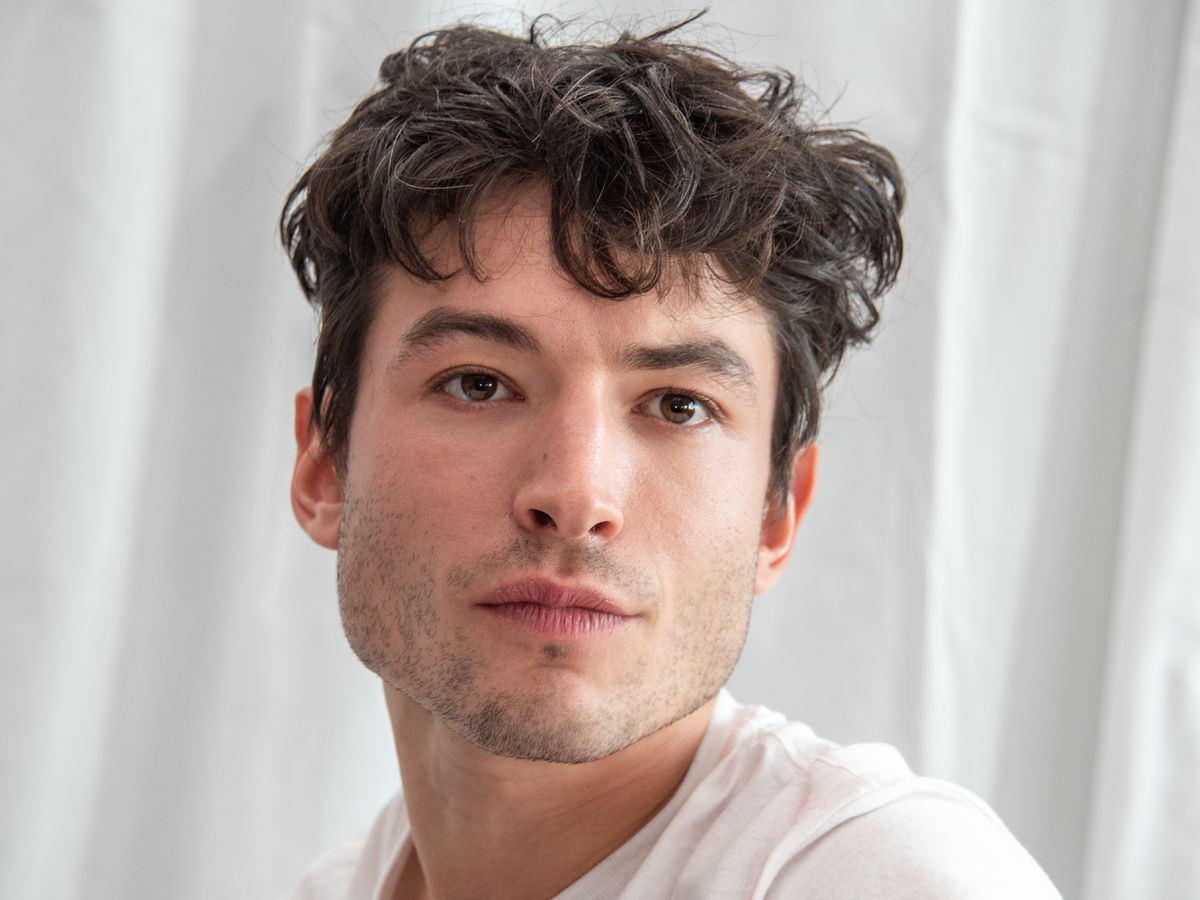 “The Flash star holds kids captive in gun-filled farmhouse,” blared the headlines. But even after reading the news accounts of the latest allegations against Ezra Miller, the actor’s behavior is still hard to fathom. Known for his roles in Justice League and Fantastic Beasts, the American actor’s run-ins with the law include assaults, arrests and reports of alleged child theft. Every new headline only raises more questions about the erratic actor. What’s going through his mind? Where is he right now? And above all – how did he get here?

Ezra Miller grew up in an artistic environment. His father is a literary editor and his mother a modern dancer. In a 2011 Interview profile, the actor said about growing up in New Jersey, “There was such an intense concentration of wealth, and such a low concentration of any actual human happiness.” When he was six years old, his teacher asked him to do a class presentation on his favorite book. Miller brought a blood-covered stuffed dog to class with a tape recorder attached that played Miller’s dramatic reading of Stephen King’s Cujo. The teacher gave him the highest grade.

“Art is the only thing I have. Otherwise I’d be long dead. I probably would have done it myself,” he told Playboy in 2018. To overcome his stutter, he took lessons in the bel canto style of singing and made his debut at age six in Phillip Glass’s White Raven at the Metropolitan Opera in New York. After that came film roles in cult favorites, We Need to Talk About Kevin (2011) and The Perks of Being an Outcast (2013). Then, Hollywood came calling with lucrative franchise roles as Aurelius Dumbledore in Fantastic Beasts and The Flash in Justice League.

“Queer actor Ezra Miller is the hero we need right now,” headlined the 2018 article in The Guardian by Elle Hunt, who said Playboy’s choice of Miller for its cover shows the world is really changing. Early in his career, Miller said quite matter-of-factly that he identified as a non-binary queer person, and his signing by DC made him the first out-of-the closet actor to play a superhero.

Miller’s flamboyance made him an idol on social media, and he muses in interviews on topics like colonialism, mental health, and about time as a construct. He confessed that he had gone through an adolescent stage of rebellious angst during which he “burned, broke, screamed, and hit things,” tormented by his privileged place in a world marked by “gross economic disparity.” Every appearance on the red carpet was an opportunity for performance art and his interactions with fans were often unpredictable. One day he would kiss fans like a typical movie star, and the next he would answer questions in gibberish, dressed as Toadette, the Mario Kart character.

Miller loves to talk about his farm and brags about watching his goats give birth. He advocated openly for the right to own semi-automatic weapons, until his publicist asked The Hollywood Reporter to remove that statement after the October 2018 shooting in a Pittsburgh synagogue.

“I’m trying to find queer beings who understand me as a queer being off the bat, who I make almost a familial connection with, and I feel like I’m married to them 25 lifetimes ago from the moment we meet,” he said in a 2018 Playboy interview. “And then they are in the squad — the polycule. And I know they’re going to love everyone else in the polycule because we’re in the polycule, and we love each other so much.” Miller was talking about the polyamorous group, which he christened the “polycule” (polyamory + molecule), that lives with him on his 96-acre farm in Vermont in the US. Ezra Miller was undoubtedly the most original star of the 2010s by far.

A couple of years ago, the actor’s eccentricity began to cause concern. In April 2020, a female fan tried to dance with him in a Reykjavik bar in Iceland, and Miller reacted by grabbing her by the neck and throwing her to the floor. The video went viral on social media, although the most of the comments dwelled on the fact that Iceland had not imposed social distancing and mask requirements in the middle of the first Covid wave.

In March 2022, Miller was arrested for disturbing the peace at a bar in Hawaii. According to witnesses, the actor lost his temper when some people started singing karaoke. He began yelling obscenities, spat at a man playing darts and snatched the microphone away from the singer.

The actor was released from jail after a couple of friends posted the $500 (€480) bail. But a few hours later, the couple that posted bail sought a restraining order against Miller, claiming that he had injured them with a chair, stole a wallet and was refusing to leave their home. Miller had 10 altercations with the police during the few months he spent in Hawaii. His companion on that vacation was 18-year-old Gibson Iron Eyes, whose parents accused Miller in June of preventing them from seeing their daughter. Miller met Iron Eyes in 2016 at a demonstration against an oil pipeline construction project through Sioux land. At the time, he was 23 and she was only 12 years old. Her parents claim Miller is endangering their daughter’s health by giving her alcohol, marijuana and LSD. Gibson is 18, but is still legally dependent on her parents under Sioux tribal law.

After going to Miller’s Vermont farm where their daughter currently resides, Gibson’s parents discovered that she had bruises on her body, and had no ID card, car keys, bank card, or cellphone. They began to suspect that she was being held against her will and reported Miller to the police. “Ezra uses violence, intimidation, threat of violence, fear, paranoia, delusions, and drugs to hold sway over a young adolescent Tokata,” reported the Los Angeles Times about the parents’ court filing that uses their daughter’s birth name.

Gibson Iron Eyes has declared her independence on Instagram, and claims to be mentally stable and happy making her own decisions. She calls Miller a “comrade” who is helping her, and accuses her parents of transphobia, claiming that they are the ones guilty of “emotional and psychological manipulation.” The court has not served Miller with the complaint because it can’t find him – he has until July 12 to appear before the judge.

On June 16, a Massachusetts woman obtained a restraining order against Miller, who she claims behaved inappropriately with her 12-year-old son. The boy, who also identifies as non-binary, told The Daily Beast that Miller made him feel “uncomfortable” by inappropriate hugging and touching. “It made me nervous and scared because he yelled at my mom,” said the boy. His mother claims that in February, Miller showed up drunk at her home wearing a bulletproof vest and carrying a gun. Your son is “an elevated being, and would be lucky to have someone like me guide them,” yelled Miller.

On June 23, Rolling Stone revealed that three children between the ages of one and five live surrounded by guns at Miller’s Vermont farm. In March, Miller met a 25-year-old woman in Hawaii and invited her to move to the farm with her children. But the father said that he has not seen his children since Miller secretly took them in March. However, the mother says that Miller rescued her from a violent relationship. “He has given me a safe space for my three children – his farm is a safe haven for us,” she said. Regarding the guns, she says they are “for self-defense,” and that they are kept in a separate room where the children aren’t allowed. But Rolling Stone reporter Cheyenne Roundtree claims to have seen videos showing at least eight submachine guns, rifles, and revolvers scattered around the living room. Two others reported seeing the baby put a bullet in his mouth. On May 16, a Vermont social worker visited the estate and reported that the children “looked good,” although she recommended follow-up visits.

Warner Bros., the studio behind The Flash and Fantastic Beasts, has called several emergency meetings to decide how to deal with the Miller scandal, but so far has not changed the June 2023 release date for its $200 million blockbuster, The Flash. According to Deadline, other projects in development with Miller have been put on hold.

Ezra Miller and his team have not made any statements about the allegations. Miller deleted his Instagram account shortly after posting memes that seemed to mock the court’s attempt to find him – ”You cannot touch me I am in another universe” and “Message from another dimension.”